What are gap-fill activities and can they be used to learn a language?

If you’ve ever attempted to learn a new language, or studied one in school, then I’m sure you’ll be familiar with gap-fill activities (sometimes called “gap-filling” or “cloze”). The task was first described in the early 1950s and quickly spread to a variety of educational fields. Though by no means limited to language learning, gap-fills have seen heavy use in language teaching and testing for well over a half-century. Given how ubiquitous they’ve become, it’s worth taking some time to understand what gap-fills are, what they purport to measure, how well they work, and for whom they are most effective.

What are gap fills?

It’s worth noting that gap-fills are not a single type. Rather they are part of a broader family of item types where a number of words have been deleted which learners are required to restore. The process for removing words varies according to the learning context and goals. In many cases, every nth word is selected for omission, regardless of its part of speech or importance to the overall meaning of the text. The most commonly recommended rate of omission is every 5th word, but it can vary between every fourth word and every twelfth word. This type of gap-fill is often called a fixed-ratio cloze.
Fixed-ratio clozes were initially designed as a test of readability, and those using gap-fills for language teaching and testing often wanted to be more purposeful in selecting which words to omit from a text. As such, deletions were selected rationally according to a specific purpose. An example of this would be removing all prepositions from a text in order to ascertain the learner’s knowledge of preposition usage. This remains one of the most common procedures for creating gap-fill activities for language learners. It is rooted in a structuralist view of language instruction, which focuses on breaking down language into its constituent parts, and obtaining mastery over those parts in order to develop proficiency.
The gap-filling tasks described above require the learner to replace the word that the teacher has deleted, usually by writing (or typing) it into a blank. These are typically referred to as open gap-filling tasks. However, there is another type of gap-fill in which the range of possible responses is limited by a bank of answers from which the learner must select. These are often referred to as banked gap-fill tasks because the correct answer appears in a “bank” of randomly ordered words (often with additional words as distractors). Banked gap-fill activities are fundamentally different from gap-fills in which the learners are required to generate their own lexical items to fill the gaps. They represent a lesser challenge to the learner and a poorer measure of language ability because deductive reasoning can be used to select the most suitable answer from among the choices.
‍ 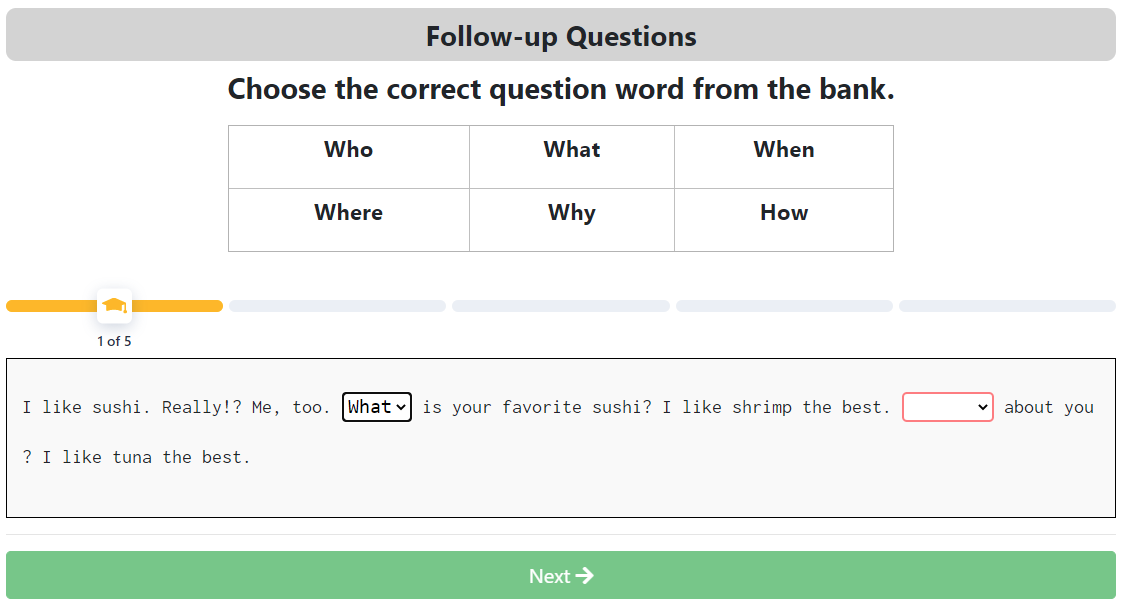 There is no straightforward answer to the question of what gap-fills can tell us about the knowledge of language learners. This is because the task type is particularly versatile and can be used in both formative and summative capacities. In addition to the text gap-fill activities described previously, it is also possible to adapt the task to focus on listening skills and spelling. This is accomplished by providing audio of the text for the learners to listen to as they fill in the blanks. As this example illustrates, there are numerous constructs the gap-fill type can be employed to measure.
In the case of fixed-ratio gap-fill activities, most would agree that phonological, semantic, and syntactic knowledge of the target language is required in order to successfully complete the task. However, in the case of rational-deleted gap-fill activities, where omitted words are selected according to a specific criteria (e.g., articles, prepositions, pronouns, etc.), the testing narrows to a specific (and often limited) domain of knowledge. Although these tasks can be useful for understanding whether or not a student has mastered a particular aspect of language use, they are more suited to measuring lower-order core proficiency than higher-order language skills.
The real question surrounding gap-filling activities in language learning is: Do they serve as valid measures of reading proficiency? Put another way, do they shed light on the learner’s ability to receive and interpret information presented as text? Back in the 1970s, fixed-ratio cloze tasks emerged as a measure of second language reading ability and general language proficiency. However, as researchers later pointed out, the construct measured by a gap-fill is closely related to the nature of the specific word omitted. Understanding this limitation led some to conclude that rational deletion of words provides greater certainty of the construct being measured by the gap-fill.

Who benefits the most from gap-fills?

In broad terms, the research suggests that lower-level learners benefit from gap-fill activities more than their higher-level peers. This view seems to be supported by one of the more influential models of reading comprehension, which suggests a hierarchy of cognitive processes during reading. The lowest levels of this hierarchy (word recognition, lexical access, syntactic parsing, and establishing meaning) can be reliably measured with gap-filling tasks. However, it is not so certain that the same holds true for the highest levels of the hierarchy (inference, building a mental model, and creating a text level representation). In the case of fixed-ratio cloze tasks, there are several studies that support the position that these can measure higher-level reading processes (go here to see a summary). On the other hand, there are also studies that indicate such tasks are poor measures of higher-level reading processes (go here to see a summary). There is no definitive explanation for these conflicting results, but one hypothesis is that different levels of learners respond differently to both the reading task and the gap-fill question format. Language learners with lower proficiency cannot handle more complex textual information, whereas higher proficiency learners have the ability to make use of more textual information when producing their answers.

Regardless of what the research says, gap-fills remain popular among language teachers and feature heavily in the textbooks of nearly all of the major publishers. The view that they are suitable only for beginners is not unchallenged, and so we can expect to see gap-fills used in a wide range of contexts for some time to come. There is, however, a discernible trend in language teaching and learning as it relates to gap-filling. There has been a steady shift away from gap-fills as a format for standardized testing toward more formative applications (often referred to as assessment for learning). This is in line with a more general trend in language education that elevates formative assessment above summative assessment in helping students to meet the curriculum objectives.

Here is an example of a fixed-ratio gap-fill. Originally designed as a test of readability, they became a popular question format in educational testing. In fixed-ratio gap-fills, ever nth word is removed. In the example below, every 5th word has been removed.

In contrast to a fixed-ratio gap-fill (where words are omitted regardless of their part of speech or importance to the overall meaning of the passage), words removed from a rational-deleted gap fill are selected according to specific criteria (e.g. prepositions, tense, etc.).

Here is an example of a banked choice gap-fill activity. Notice that all missing words may be drawn from the word bank at the top of the activity.
‍